Why you should upgrade your clock card system

Why should you bother getting a new system when the mechanical card clocking is working just fine? Well…

There is a surprising number of businesses that still rely on the old-style mechanical clock card clocking machine. Your company might even be one of them. Maybe it’s always been there? Maybe it’s because it has never broken down and you’ve been doing just fine with it, so why bother fixing what isn’t broken, right?

Challenge accepted! Here’s why there’s now barely any reason to have the old clock card system and why you absolutely should be upgrading to a more modern time and attendance system. 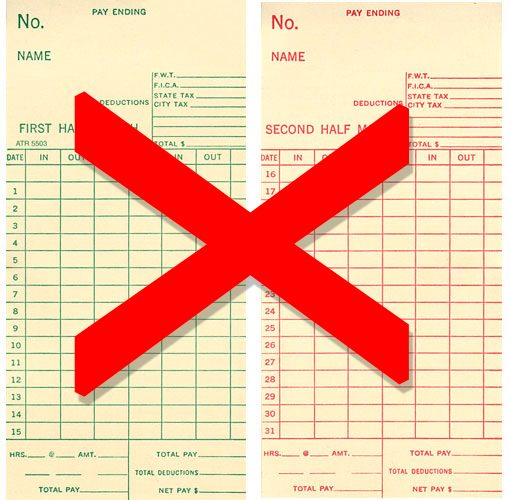 What do you get on a clock card? The in time, out time, possibly lunch bookings if you need them, and that’s it. Everything else you’re going to have to deduce from the information given. You can only find out if someone was late by getting their time card and specifically looking at each time and comparing that to what their designated start time is. If you’ve got rounding and grace periods, then again this needs to be manually calculated. You’re also probably only going to find these things out when you finally get round to reviewing the clock cards. If you don’t review the cards until a Friday, and someone was late on a Monday, then four days tends to be too long a period before you investigate; you’re not going to find much out and that’s plenty of time for someone to think up a good excuse! Oh and one more thing… what do you do if someone’s card goes ‘missing’?

Now compare this to a modern time and attendance system. With Proximity and Biometric clocking, all run in real-time by computer software, you get all the information available on a clock card as well as anything and everything else to do with time and attendance. Grace and rounding can be factored in and automatically applied. If someone is late or doesn’t show up to work, the system is able to flag this and can even let you know (including by email), meaning you can investigate right away. Overtime can be calculated automatically and you have all this information right there, a click of the mouse away. Why would you want to sit and review clock cards each week when there’s a system that can do all these calculations for you in a matter of seconds?

We talk about buddy clocking in these blog posts a lot, and that’s because it’s an important and critical issue that you should absolutely be taking every step to eliminate. Buddy clocking can cost you obscene amounts of money in time “stolen” from the company by dishonest employees. Buddy clocking is where someone is clocking in for someone else (typically because that person is running late) and you are now paying that person wages, even though they’re not there. Don’t forget, buddy clocking can also take place at the end of the day. With a clock card system, this is ridiculously easy to do and get away with; especially in larger workforces. Simply picking up someone else’s clock card and whacking it through the machine takes no time at all. As an employer, all you have is the time stamped on the clock card, and you’re none the wiser.

A modern time and attendance system will either make buddy clocking extremely difficult, or it will eliminate it completely, depending on the choice of terminal you go with. Proximity Terminals with key fobs are a great deterrent to buddy clocking. Key Fobs are typically kept on car keys or house keys, so someone who is running late to work has most likely got their key fob with them. This means calling ahead to ask someone to clock in for them wouldn’t be possible. Biometric terminals, such as the finger scanner and hand scanner, make it completely impossible, because the only way to clock in is with your finger or hand and assuming you’re not some kind of strange alien, you’ve got those with you at all times and you definitely can’t lend them to someone to clock in for you! As an employer, why would you allow employees to steal time and therefore money away from your company with a clock card machine when you could have a system that eliminates such theivery altogether?

If you have a clock card machine, then someone has to sit down every week/month/etc. and go through all those time cards and input that information into payroll. Other than the laborious transfer of information, they’ve also got to calculate overtime, deduct absences, lateness’s, factor in any additional rules (flexitime, rounding, grace, etc.) and they also have to do all this on top of whatever other responsibilities they have. Not to mention that, unfortunately, human beings are imperfect creatures and we occasionally make mistakes, and mistakes in paying your employees is never a small problem! If you underpay you are soon challenged, but have you ever had an employee tell you they have been incorrectly paid too much?

Or…. install a modern time and attendance system and then literally everything in the above paragraph goes away. There’s nothing to calculate, because the system just did it for you. Get a system with a payroll link and there’s no information to transfer. There’s no chance of making a mistake because all the maths is being done by the system. Most of all, what can easily be a day-long job just became a half hour task, meaning that staff can devote time to more added-value activities. Time and money saved.

Reliability is of paramount importance and this is an area in which (good!) time and attendance systems excel. Good clocking terminals (avoid the cheap ones), are incredibly reliable and very rarely break down. This includes biometric models. Interestingly, there’s only one Biometric Hand-Scanner model in the UK… no one has been able to produce anything better; it’s that good and that reliable. If things do go wrong with a terminal, then it can be fixed or replaced just like a clock card machine, and even better, if something is up with the software-side of things, then most companies can now remote-access your system and often fix it without the need for even a site visit!

A time and attendance system is an investment for the future. You should be getting a system in that you can rely on for a decade and longer! Clock card systems really are now obsolete, a product of yester-year, unable to compete with the sophistication and functionality of the modern time and attendance system. In the same way you wouldn’t want to be running a computer on Windows ’98… why would you want to rely on a clock card machine for something as vital and important as time and attendance and paying your employees correctly?